The Victimization of Equines

This is a difficult topic for me. As a survivor of abuse, I find triggers for my own anxiety in the mere thought of any being suffering demoralization, neglect or even worse, violence. Because I run a sanctuary for horses, I see the cost in the emotional, mental and physical bodies of the horses we care for day in, day out.

Yet, the horses (and long ears) find it in themselves to forgive and come around to trusting again. At least, they learn that they can trust us because we work very hard to be trustworthy.

At the sanctuary, we had a mare come in who had to be 30 years old. She was foundered badly and her body was scarred in a unique way. Damaru showed the classic scarring of a victim of “horse tripping” – a violent and deadly form of amusement inflicted upon horses. While we tried as best we could to heal her on all levels, her body just could not repair the damage.

But, Damaru knew love. Great, boundless affection and compassion were wrapped around her every day. She was cherished and she responded in kind; she nuzzled us for treats, she stood calmly for treatments and care and her soul was healed before her body finally gave out. 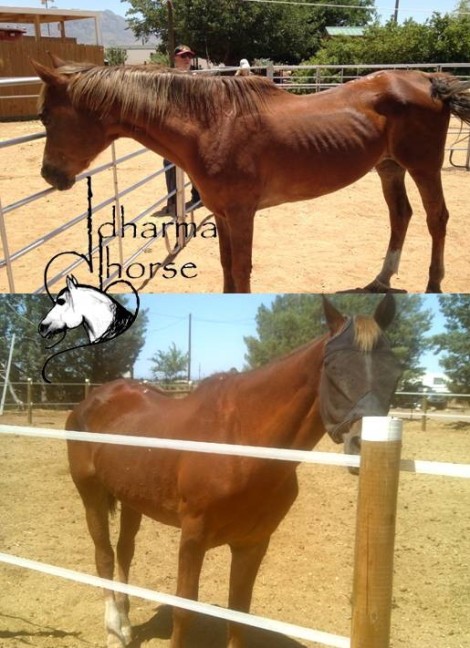 Keeping her free of pain became more and more difficult and we finally made the decision to euthanize her (surrounded by those who loved her)… it was the final and ultimate act of love. We were honored to have known her!

While Damaru was with us “after the fact” of her abuse, I watched a horrid scene of victimization that I was powerless to prevent one time when I was leaving a facility where we were preparing for a Horse Trials. I was to be the “cross country steward” that weekend and had been out on the course inspecting the jumps. As I was driving out, I saw a group of men on horseback repetitively roping a young donkey. She was terrified.

My truck windows were down and I could hear the men yelling and laughing – they sounded quite drunk. I was alone except for them at the facility. It was late evening and as I watched the donkey tremble and try to duck away from them, it felt like I was watching a gang rape. If I had tried to intervene, I would likely have been in great danger. I couldn’t call the authorities, what these monsters were doing was perfectly legal, acceptable in the “cowboy” circles…

I cried all the way home and all night. How could humans have so little respect for the precious life they were tormenting? How could I be so impotent in my ability to help her? I decided to try to buy her when I went out the next day. She was gone. So were the cowboys who had abused her. But, in the world of “livestock”, what they were doing was not considered abuse. In my world, it was the definition!

The blatant mishandling and demoralization in those two examples is easy to recognize. What I saw a few months ago is a bit more difficult for some people to understand as abusive. I had gone to an event to watch a trainer’s demonstration and went down to the arena early. This trainer was standing outside the arena with a coming three year old filly all saddled, wearing a halter. He stood beside her with her lead shank looped through a pipe on the fence, standing her just above a patch of green grass. The grass was inches below her muzzle and every time she reached down to take a bite; he hit her in the head with the end of the lead rope. Over and over…

I decided that I couldn’t watch any more. I left. Many people might think that he was “training” her – perhaps “showing her who was boss”. I saw disrespect that was causing confusion and a situation that he (as the one who was supposed to be the thinking part of the team) could have resolved by simply holding her over by the abundant dirt and sand that offered no temptation.

Horses learn that we are either kind and aware or unkind and oblivious.

Horses become victims when the humans responsible for their wellbeing are either deliberately cruel, unconsciously neglectful, blind and deaf to their needs or blatantly self serving. As a species, we can do better. And I live my life trying to be a voice for the voiceless. Let’s all do better.

The Herbal Guide For Stables